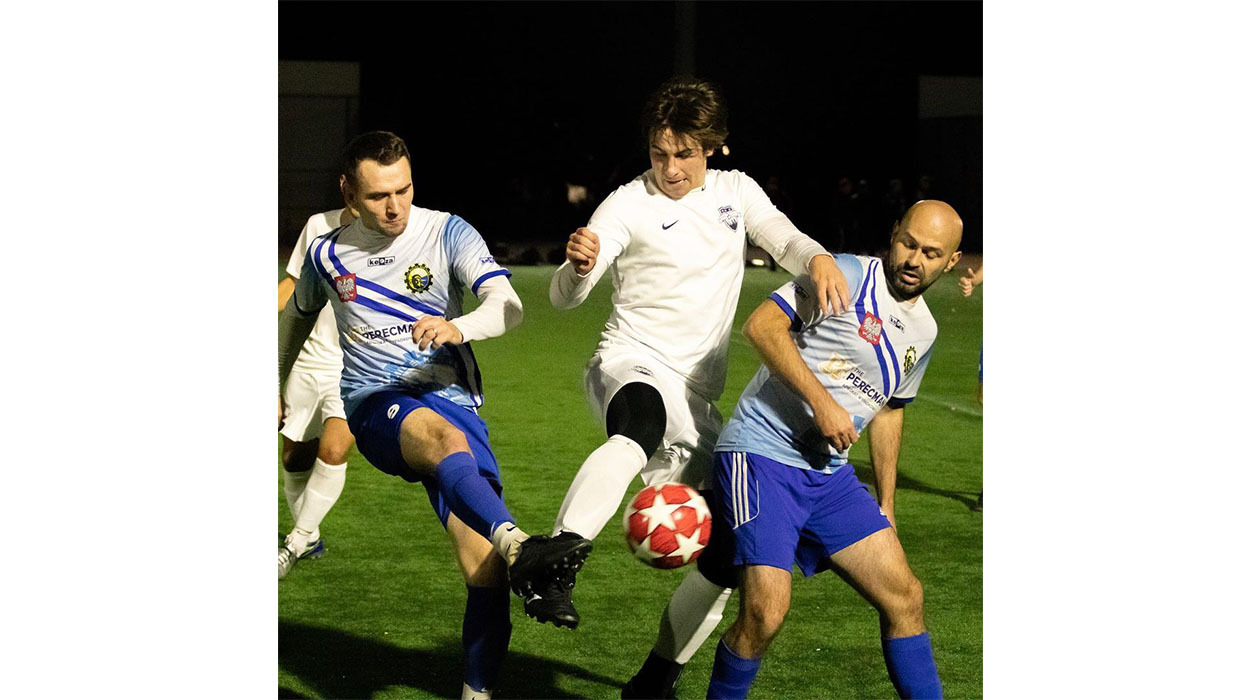 Week 8 in the Cosmopolitan Soccer League's Division 1 took about half a month to complete. But in that time a lot happened. Eight games, including four teams playing twice, did a lot to the table. Stal Mielec's both lost to a bottom table team and tied the division leaders. Borgetto and FC Sandžak both lost as the recently promoted find competition tougher than they may have imagined. Plus others like Polonia SC split games in the steangest way possible.

The full recap is below:

Saturday, November 6 FC Sandžak vs New York Shamrock SC (2-3) Goal scorer information not provided by either team New York Shamrock SC earned its third straight win by defeating FC Sandzak, 3-2, in the only Saturday contest of Week 8. The newly promoted side played a valiant game against the defending Division 1 champions but were unable to find a third goal.

The Rocks will look to make it four in a row when they host Polonia SC this Sunday, while Sandzak will try to rebound against Zum Schneider FC 03 II on Sunday night.

Sunday, November 7 Polonia SC vs Kelmendi FC NY (3-5) Goal scorer information not provided by either team Kelmendi FC NY earned its second win of the season behind an impressive offensive showing on Sunday morning. Polonia SC attempted to counter but could not overcome the visitors and fell, 5-3.

The loss keeps Polonia in 8th on the Division 1 table, at the tail end of the condensed and crowded middle section. Kelemdni now sits in 10th and can join that same middle section if they can earn a win against Richmond County FC this Sunday at home.

Jake Mann started the comeback in the 74th when a high cross from the left side landed at his feet, allowing him to slam it into the near corner to make it 2-1. From there, Rafik Mekhaldi came alive and scored a hat-trick in less than ten minutes, including an 88th minute PK, to secure his team the win. For their part Borgetto completely lost the plot despite having two breakaway chances after Mann’s goal. Their two goals were scored by Angelo Bordenca earlier in the second half, assisted by Sergio Abarca and Luis Vera respectively.

NYAC will visit Hoboken FC 1912 this coming Sunday in a match that could determine where the club deserves to be on the Division 1 table. Borgetto will visit Manhattan Kickers the same day.

Beyond’s lone goal was scored by David Asante. The New Jersey side continues to struggle in the back while Zum’s offense has found a groove in recent weeks. Ojo, who finished last season as one of the best goal scorers in the league, looked like the player of old up front. Epochi meanwhile, who has been a steady workhorse on the team in the fall this year, played a critical role as support and set-up man.

Beyond will next hit the field for Division one play this Sunday against Stal Mielec NY.

Stal Mielec NY vs Manhattan Kickers (1-5) No goal scorer information provided by Stal Mielec NY The first “real” win of the season finally came for Manhattan Kickers after eight weekends of games. The team dominated Stal Mielec NY, 5-1, and now sit in ninth place on the Division 1 table. Kickers’ head coach Bryan Baracaldo says that despite the slow start he really believes the team is coming together.

The visitors played their typical game and controlled possession early but like before allowed an early goal to go down 1-0. It might have seemed like another Groundhog Day situation but Manhattan’s offense didn’t follow the script. A buildup on the left side allowed Mustafa Mohamandi to knock an equalizer off the opposite post. Ten minutes later, Bobby Fabricant was given space at center field and hit a stunner from 20 yard out, hitting the crossbar before deflecting into the right corner.

In the second half Stal attempted to pressure but the Kickers broke the press with little issue. After a few misses on clear chances, giving Baracaldo some nerves after many lost leads this season, Brett Rojas sent a through ball to Mohamandi to make it 3-1. Space opened up from there and both Shaiem Allahmorad and James Zaidan both added insurance goals, with Allahmorad assisting on the final score.

“It was a really strong team effort, from Keeper to forwards, everyone really played simple and defended together to get the ball back and avoid the mistakes that have led to losses,” Baracaldo  said about the performance. “Our possession and ball movement was key.”

Manhattan will try to keep the positive momentum going this Sunday (Nov. 24) when they host Borgetto FC.

Hoboken played tight defensively and forced Richmond into making a lot of mistakes. This sort of play is what helped cause Dominik Urban to earn a red card midway through the first half for a takedown against James Reed, who was the last left on an attack. The team was also without Mark Shnadshteyn who was serving a one game suspension for a red card in the team’s last match.

For their part 1912 withstood the limited pressure and broke quickly trying to isolate Reed against the opposing centerback. The first goal came 25 minutes in when overloading the right side allowed Jordan Cimring to cross into Kevin Bzdek for a talented finish. With the red coming not long after, Hoboken settled into a controlling style of play and the second goal finally came in the final 45. A corner kick in the 65th minute was headed in on net by Jake Longo, saved, and finished on the rebound by Bzdek to seal the match. Joseph Braun made it 3-0 in the 80th minute when Eric Terzer found him on a forward pass.

“It really was one of our best all-around team performances and we dominated the match in every phase,” Hoboken head coach Steve Korfiatis said. “We looked comfortable offensively and not threatened at any point defensively. We kept another clean sheet which is a testament to not only our back line, but our whole squad who defended as a unit and worked hard to support one another.”

It was also a hugely special night for Hoboken as longtime goalkeeper and club VP JP Francini returned to New Jersey for the night and played keeper. Despite it being a quiet game for him, it meant a lot to everyone involved.

Richmond will be in action again this Sunday when they visit Kelmendi FC NY.

“We just weren’t ready to play and lacked energy/drive, assistant Zum coach Lucas Doucette said afterwards. “Overall we buried ourselves too deep in a hole with our horrible start, but I’m proud of the guys for finding a foot in the game and fighting till the end. Hopefully we can learn from this and be better next time out.”

Polonia scored two goals early Zum rebounded somewhat, controlling more possession and ending the first half on the right foot. But a great counter by the visitors in the second half sealed the game. A late penalty scored by Isaac Epochi was the only consolation Zum could take home. The match was called off early when the lights shut off with about ten minutes to go and the game was called.

Zum will look to wake up on Sunday night when they host FC Sandzak while Polonia visits New York Shamrock SC earlier in the day.

Hoboken head coach Steve Korfiatis noted that his formation, affected by injuries and absences, as well as players going down during the match itself, needed to be altered.

“We have been really consistent throughout the year defensively but had to adjust significantly because of injuries and absences across the back line,” he said. “I don't think the boys underestimated Stal or took the match lightly as they worked hard for the full 90 minutes. It is logical given our consistency in defensive personnel to struggle when we have to make adjustments and unfortunately we couldn't quite cope with that and the narrowness of field which caused us to play a much more direct style.”

Tommy Lozowski assisted on Hoboken’s first goal of the game early in the first half, playing a great long ball to Jordan Cimring. A run past the back line and rounding the keeper allowed for the clean shot into the back of the net. James Reed vollied the second goal early in the second half after a great right footed volley from outside the box.

On the other side, Jakub Szwakop and Patryk Majkut found the back of the net for Stal. The latter’s performance was his return to the team after finishing up with his university’s soccer season. Despite trailing in each half the team poked away and had multiple chances down the sides of the narrow McCarren Field, something Hoboken struggled with.